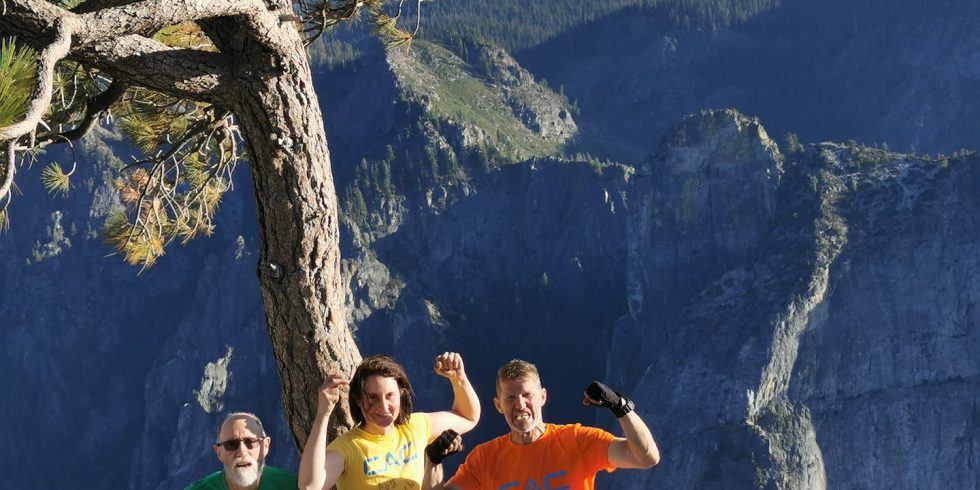 As you may have heard, Cait Horan, our Rock Squad Coach and a Climbers Against Cancer ambassador, recently climbed the Nose on El Capitan wall-style in Yosemite National Park. Cait accomplished this amazing feat in a team with two other Canberra climbers – Greg Fisher and Peter Blunt.

For those of you who are new to the climbing world, Yosemite National Park has been the epicenter of rock climbing for decades, and was where the sport began as a sort of counter-culture movement, much to the dismay of park rangers, before going mainstream. The famous Yosemite Valley is home to massive granite monoliths such as El Capitan and Half Dome. Climbing these big walls are the prized goals of climbers all around the world, and the ceiling of accomplishments on these walls continues to be pushed higher.

Read about Cait’s accomplishment in The Canberra Times.

Our social media manager Faith Meckley asked Cait a few questions about her experience, and we wanted to share her answers with you.

Q: Can you give a quick run down of the stats and timeline of your climb?

A: We fixed lines to Sickle Ledge on Thursday and then slept on the ground. The start day was on Friday, September 20th, and we topped out halfway through the following Tuesday the 24th. We got stuck behind a slow team that cost us a whole day. We climbed for around 133 hours on 19 hours of sleep. Our haul bag weighed nearly 80kg and the rack weighed another 10kg. There were two other teams in our a general vicinity, one German and one American. It was the German team that really slowed us down. We were also passed by another Australian team who were bailing as they had had trouble on the King Swing.

Q: How long has this climbing trip and The Nose attempt been in the making for?

A: My whole climbing life, but more intensively, the last eight months.

Q: How did you and your team train and prepare for El Cap?

A: We spent weekends away in Nowra, the Blue Mountains, and Frog Buttress. We practiced hauling heaving loads and anchor systems in the gym. I did a week climbing in Yosemite in July to get used to the style there.

Q: What was the hardest part(s) of the climb for you?

A: The Stove Legs Crack. It was so awkward and not my style. I had been waiting for the Germans for many hours in hanging belays and the wind was howling.

Q: What were the most enjoyable moments for you?

A: Watching the sun set and rise from El Cap Tower.

Q: What surprises came up along the way that you weren’t expecting?

A: I was surprised at how content I was up there. I could have stayed up there a long time if I had unlimited water and food.

Q: What was it like to talk to Tommy Caldwell and Kevin Jorgeson afterward about your achievement? What did they say to you about it?

A: Tommy and Kevin were really happy for me. Tommy commented I was looking pretty good for someone who had just climbed The Nose for the first time. Kevin saw me from across the room and ran over to give me a hug. It was really nice that they were there when I finished.

Q: What else are you doing in Yosemite besides sending the most famous climb in the world?

A: Trying to become a better crack climber, now that I have nerve damage in my feet from big walling, the foot jams are getting easier!

Q: Do you have any words of wisdom/encouragement for other cancer survivors/patients about pursuing their dreams?

A: The crux of cancer is never giving it any room in your head. You have to believe you will win.

Q: Anything else you’d like to add about your experience?

A: Big wall climbing is really living. Get on it.